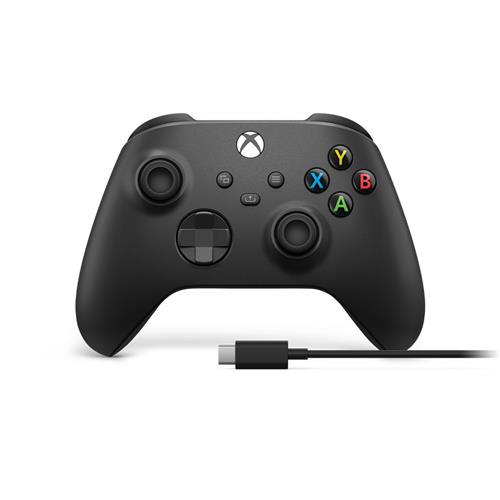 Plug in and PlayN/AExperience the modernized design of the Xbox Wireless Controller featuring sculpted surfaces and refined geometry for enhanced comfort during gameplay. Play wirelessly or use the included 9 USB-C cable for a wired gaming experience. Stay on target with a hybrid D-pad and textured grip on the triggers bumpers and back case.N/AN/AStay on targetN/AExperience the enhanced comfort and feel of the new Xbox Wireless Controller featuring a textured grip on the triggers bumpers and back-case.N/AN/AShare buttonN/ASeamlessly capture and share content with the Share button.N/AN/ABluetoothN/APlay your favorite games on Xbox Series X Xbox Series S Xbox One Windows 10 PC and Android. iOS support coming in the future.N/AN/AConnect to Xbox consoles with Xbox Wireless or using the included 9 USB-C cable. Wirelessly connect to Windows 10 PCs tablets and Android devices using Bluetooth or with the included 9 USB-C cable. iOS support coming in the future. Connect to Windows 7 or 8.1 PCs with the included 9 USB-C cable; some functionality not supported.